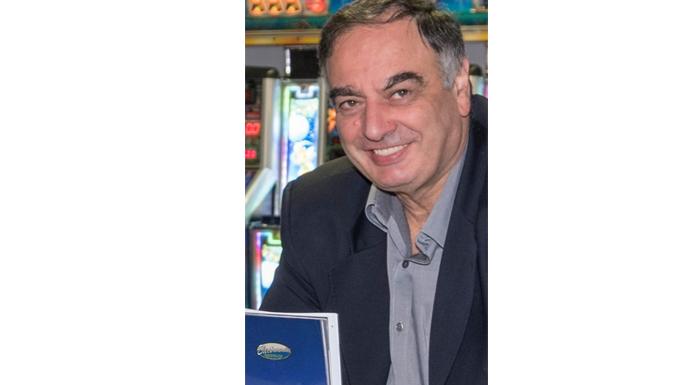 John Stergides is one of the best known names in UK high street gaming, as the head of not only the leading supplier of arcade games, FEC games and gaming machines, ELECTROCOIN, but also of the Stergides family.

With decades of knowledge and significant contributions to UK gaming both in his role as a manufacturer and operator, Stergides has built ELECTROCOIN up to become one of the top UK manufacturers and distributors since 1976 still under the same ownership.

He has also been instrumental in establishing the Park Avenue Open Day, an unmissable networking and demonstration event for the industry which also raises money for The Bacta Charitable Trust in the process.

It was either Apache or The Young Ones by Cliff Richard and the Shadows. Remember I was in Cyprus with a group of friends listening to the radio and hearing this for the first time was something else.

Song from your teenage years?

Tom Jones’ Delilah was seemingly always on the radio during this time so this song and that chorus definitely take me back to then.

One Way Ticket by Neil Sedaka. I bought this because I really enjoyed the musical instruments used in the song and the lyrics spoke to me, plus I could understand them too!

This was Neil as well, and the album was Neil Sedaka Sings Little Devil and His Other Hits. I really like his music in particular, One Way Ticket.

Song that makes you want to dance?

The Swinging Blue Jeans’ Hippy Hippy Shake. It’s a song which reminds me of my youth.

Last song you heard before now?

Brotherhood of Man’s Save Your Kisses For Me was just on the car radio as I drove to the office.

Song you can no longer stand?

Literally any of the new songs now! They’re just noise and the reason why Britain will never win Eurovision.

Song you sing to in the shower?

Y Viva España. I dedicate this to my wife, who is Spanish – La gente canta con ardor, Que Viva España!

Song that is a guilty pleasure?

Song you want played at your funeral?

I was going to choose One Way Ticket again as you can’t come back, a funeral is definitely one way! However, I think I’ll go for Ena Amaxi Me Dio Aloga by Grigoris Bithikotsis. It’s a Greek song which translates as ‘a one horse carriage with two horses’.

First song you paid for on a jukebox?

When I was younger and allowed to go into our local coffee shop, the Dragos Arcade Café in Cyprus, I was paid some money to clean the pinball machines. Afterwards I would use the money I earned to play Speedy Gonzalez by Pat Boone on the classic jukebox as it was the best song on there!

Call now to find out about the latest TouchTunes jukebox deals or to arrange a demo, simply contact Toby Hoyte on 07970 229124

Also, if you’d like to share your musical memories and feature in an upcoming MyTouchTunes, call Toby or email: toby@soundnet.net

Call Now
Back
We use cookies to ensure that we give you the best experience on our website. If you continue to use this site we will assume that you are happy with it.OkRead more